ASA is the American Sailing Association. They are a private company and not a government recognized institution of any sort. ASA has been around for about 30 years and so they have a lot of name recognition and a lot of sailing schools associated with them. Sailing schools for ASA are independently owned schools. Each school implements an ASA check box training system, a book published by ASA, a paper test published by ASA - all under standards solely created by ASA. Schools decide if the student passes or fails the certification. Quality between each school varies according to the owner of the school. Their theory training is in book format only.

NauticEd is also a private company. NauticEd is the only sailing education body recognized by the United States Coast Guard. This is because the Coast Guard demands that the training be implemented according to the American National Standards (EDU-3) for sailing training and assessment. NauticEd issues the officially recognized SLC sailing license which accepted by Port Authorities in the Mediterranean.

See this link which shows NauticEd as an approved Sailing Education company for the American National Standards.

At the time this article was last edited -  October 2020, ASA was NOT listed as complying to the American National Standards.

US Sailing is a nonprofit entity. They are not recognized under the American National Standards for sailing training. US Sailing has been around for more than 20 years. US Sailing have a lot of credibility because of their involvement with the Olympic Sailing racing team. US sailing are also active with community sailing programs around the country.

The RYA is the Royal Yachting Association. They are officially recognized by the UK Maritime Coast Guard (MCO)and the UK Government as the official UK Sailing and boating education company much like NauticEd is for the USA. The RYA stick to rigorous standards for education. The RYA can issue the United Nations ICC license which is another sailing license accepted by port authorities in the Mediterranean. NauticEd partners with the RYA and offers the RYA Day Skipper theory course online.

See this table of comparison of all the major certifying bodies. 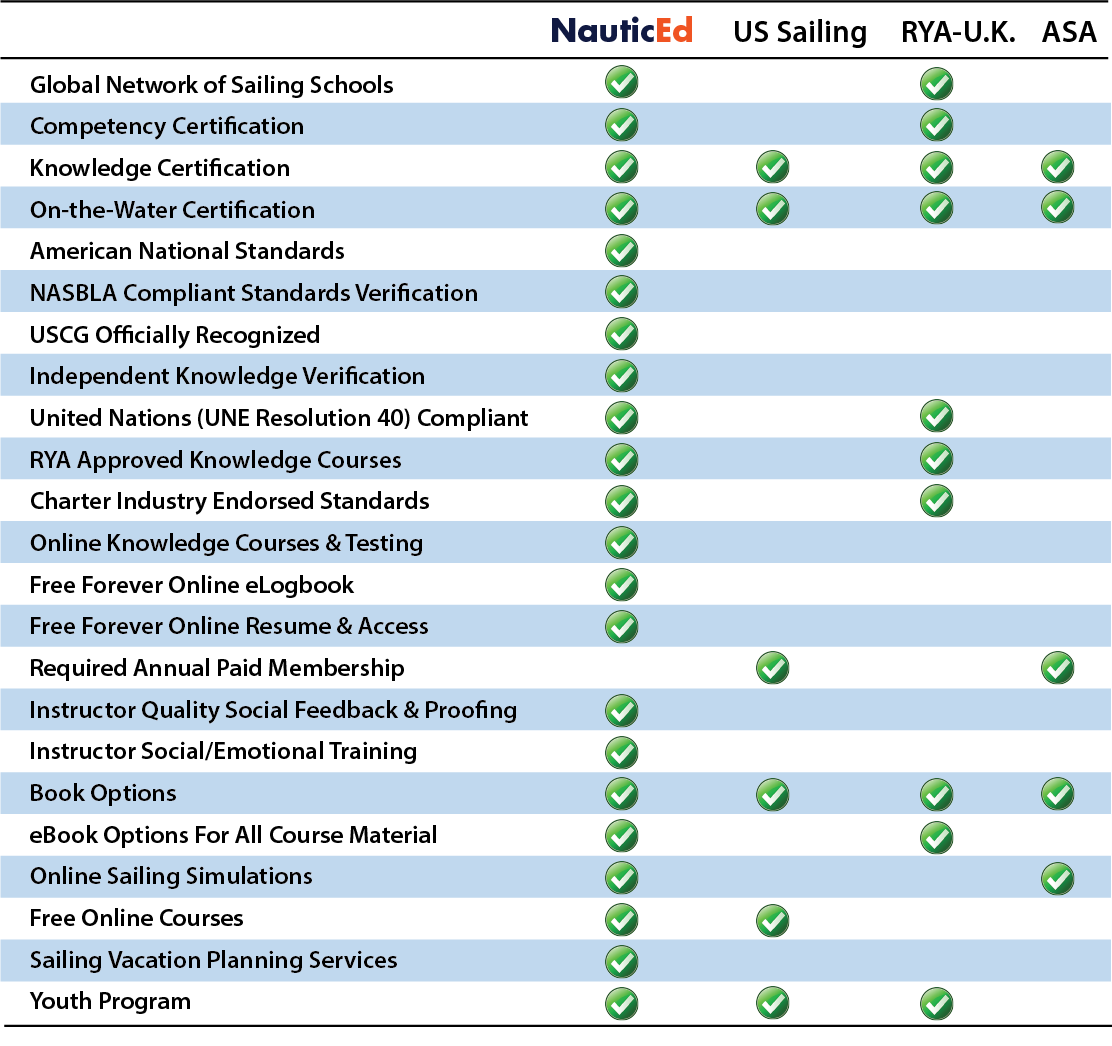 NauticEd certifications are listed below. Visit our Sailing Courses page to discover how your goals would match the certification ranks. 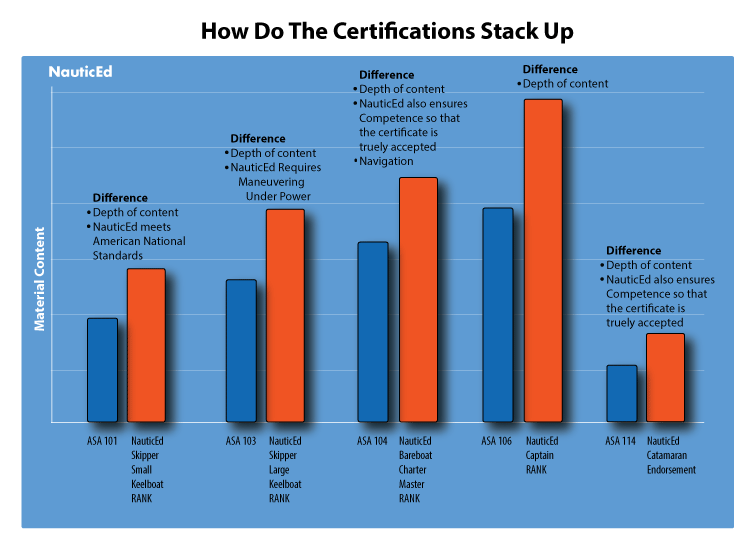 The above image shows how NauticEd certifications stack up against ASA Certifications. Essentially:

Admittedly we are biased but the following is why we believe NauticEd is the best company to choose as your sailing education partner:

NauticEd uses 21st century education techniques. Our approach to certification is based in competence both in practical on-the-water skills and in theory knowledge. Certifications and licenses are issued only when the student exhibits a high degree of competence which is measured by extensive past sailing experience logged and passing a rigorous set of multimedia course material. In addition, to gain the certificate recognized by the Coast Guard, the student must be deemed competent under the standardized set of on-the-water assessment rubrics established by the Coast Guard. The rubrics were created by sailing industry professionals who advised on the assessment rubrics. This assessment is implemented by our network of practical NauticEd schools who also adhere to the American National Standards. In our opinion, the assessment rubrics are created to the proper standard for practical on-the-water competence as well as theory knowledge.

NauticEd uses top quality practical training schools for on-the-water training. The on-the-water portion is broken out into 2 parts to ensure competence as developed by the United States Coast Guard; Training and then Assessment using a standardized education methodology - Rubrics.  Students are trained on-the-water over a series of approximately 35 tasks. The student is then assessed as to their grade of competence for each task. At the end of the assessment, the instructor has objective information so as to assign an overall practical competence to the student; Fail - Qualified Crew - Skipper - Bareboat Charter Master - Offshore Captain. In this manner, the instructor/assessor feels no pressure to pass someone just because they paid their money. If a less than desired practical competence is awarded, then a remediation plan is developed with the student to bring the student up to the desired expectations.

Overall, NauticEd focuses more on competence of the student and delivers a Coast Guard recognized sailing certification in accordance with the American National Standards in a manner that is more fitting for the 21st century.

Because of the above, NauticEd has additionally been authorized by Mediterranean Governments to issue the SLC which is a legal sailing license valid for sailing in their waters. All yacht charter companies worldwide accept the NauticEd certifications and the SLC as being recognized and valid.

Give NauticEd a try today by starting out with two free courses online and also entering some time into your electronic logbook. All for free.

G
Grant is the author of this solution article.

Did you find it helpful? Yes No

Send feedback
Sorry we couldn't be helpful. Help us improve this article with your feedback.